For Kamm Prize Winners, Social Justice is a Calling

Rooa Abdelmagid ’22 joins a tradition of winners of the Linda Heller Kamm ’61 Prize who have committed to advancing social justice causes.

The child of Sudanese immigrants, Rooa Abdelmagid ’22 was drawn to Brandeis for its foundational commitment to social justice. She was a bit apprehensive; as an African first-generation student who wears a hijab, she had long endured nuanced if not blatant racial, religious and cultural bias. Moved in her teens to volunteer on behalf of the rights and safety of other young people, Abdelmagid came to Brandeis as a seasoned social justice advocate. Her continued, exuberant resolve to “put herself out there” won the recognition of her peers in the form of this year’s Linda Heller Kamm ’61 Prize. In receiving the honor, Abdelmagid joins a succession of Brandeisians who as undergraduates gave voice to causes from accessibility to inclusiveness, to the prevention of bullying, prejudice and discrimination.

For recipients, the prize is especially meaningful because winners are nominated by their peers. The awardees walk in the footsteps of Kamm ’61, a groundbreaking lawyer and a University trustee since 2020.

The first woman to serve as general counsel to the U.S. Department of Transportation, Kamm endowed the annual award a decade ago as part of her 50th reunion gift, earmarked for an undergraduate student committed to advocating for social justice.

Empowering Young People to Help Each Other

Raised by a single mother who remains her spiritual compass and strongest role model, Abelmagid volunteered through her years attending Springfield’s High School of Commerce in a program run by the Springfield District Attorney’s Office on internet safety for elementary and middle school students. She chose pressing topics, interviewed the kids and produced videos that became part of an educational tool kit. “The goal was to spread awareness that we should pay attention” to these issues, she said. Abdelmagid also served on a youth advisory board with the goal of launching a range of peer-run programs to address student issues, empowering students to share challenges in a way that wasn’t intimidating. Subjects included bullying, race, and religion.

In high school Abdelmagid felt marginalized as a hijabi but her determination outweighed her occasional bouts of nerves, she said. She graduated as valedictorian.

Abdelmagid joins a succession of prize winners who recall the award as an exciting, unexpected recognition of social justice work driven by their guiding values and humanity. In their careers they continue to educate, advocate and give voice to underserved communities and youth at risk. We checked in with former winners Elizabeth Dabanka ’20 and Samantha Daniels ’16.

Now on her way to law school, Dabanka ’20 was interning at the House of Commons in London when the news came of the award via email. “I was completely surprised,” said Dabanka in a recent interview. A political enthusiast, she was a member of the Brandeis debate team and interned at the U.S. Senate. But along with those pursuits, Dabanka was part of small highly focused campaigns including one -- ultimately successful despite much administrative resistance -- to offer free menstrual products at nine campus restrooms.

Dabanka’s road to Brandeis went from her birthplace, Kumasi, Ghana, to an elite private school founded on principles that fueled her zeal for social justice. The Wheeler School in Providence is known for weaving inclusiveness and antiracism education into its academic program. As Brandeis later did, the school aligned with Dabanka’s values, and when a paralegal internship was derailed due to the COVID-19 pandemic she found herself back at Wheeler, filling a sudden history and diversity teacher vacancy.

“Wheeler offers discussion-based education that teaches young people to contribute to society and to challenge norms,” Dabanka said. She recalls loving the depth and quality of her Brandeis classes, which, like those at Wheeler, encourage students to look differently at the obstacles faced by people of color, immigrants and those with physical disabilities. At Brandeis while majoring in politics, Dabanka helped solicit donations to the Brandeis Fund, raising $80,000 for Brandeis students needing financial aid. “I was humbled by the award,” she said. “It felt nice to be seen.” She will enter an SEO (Seize Every Opportunity) program this summer; through the program, she’ll work at the international law firm Akin-Gump and study at Columbia Law School in the fall.

For Samantha Daniels ’16, a social worker at a Mastery Charter School in Philadelphia, the award was part of the “whirlwind” of her Brandeis education in the Women’s, Gender, and Sexuality Studies Program, which she described as an awakening. Daniels went on to earn her master’s from the University of Pennsylvania School of Social Policy and Practice. “I feel like everything I learned about social work I learned at Brandeis or in the field,” she said recently. “Valuing lived experience at least as much as theory is the root of women’s studies and the root of social work. The women’s studies major was also a way of understanding my own privilege as a white person, amplified in graduate school but started at Brandeis. I went to Brandeis because I knew it would be a good place for me socially and a place to grow.”

Daniels’ role as an advocate was sparked in part during her sophomore year, when a close friend and fellow student was sexually assaulted. “I learned very quickly about how to support her and it opened my eyes,” she said. “I went to a meeting with people in a social justice class, and we talked about how to advocate for survivors, petition for a campus rape crisis center, staging protests and demonstrations and being really vocal on social media. We wanted a real culture shift around consent.” As Daniels put it, “she never shut up” about sexual assault and the protections afforded by Title 9, the sweeping 1972 law prohibiting sex-based discrimination in education. The Student Union president nominated Daniels for the award, which was unexpected and “really cool,” she said. “I was definitely not the face of this movement but my commitment was strong and it didn’t waver.”

For this year’s awardee Abdelmagid, the prize was a kind of vindication. Her first year at Brandeis was a struggle. “I asked myself, will I succeed? But deep down I knew I could challenge myself.” Deeply religious, she recalls attending a meeting where someone implied that wearing hijab was at odds with women’s rights. “I’m choosing this,” she said. Abdelmagid likes to quote her mother: “You wear it because God is watching you at all times.”

Abdelmagid has attended meetings of the Brandeis Muslim Student Association and encourages younger students not to be afraid even though they are a minority. “I told myself, I belong here. I deserve to be here.” She said she loves being a mentor and continues her work with public schools. A biology major, Abdelmagid wants to pursue a doctoral degree in pharmacy and combine western traditions with the traditional ones of Sudan. She is confident that her Brandeis education will serve her well and underscores her working definition of social justice — the ability to “always put myself in other people’s shoes.” 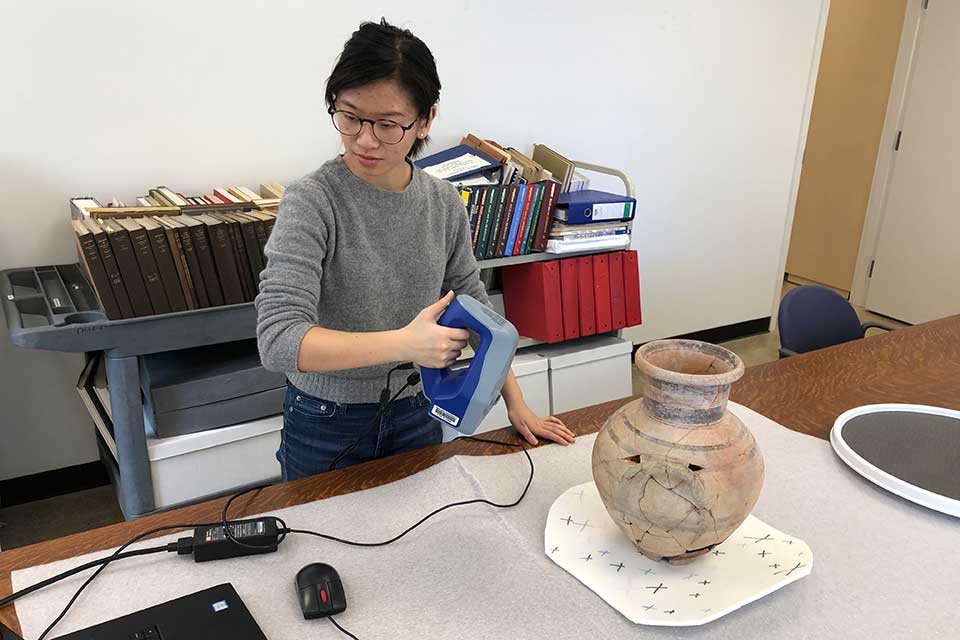 Helen Wong ’19 Is Helping Shape the Future of Archeology 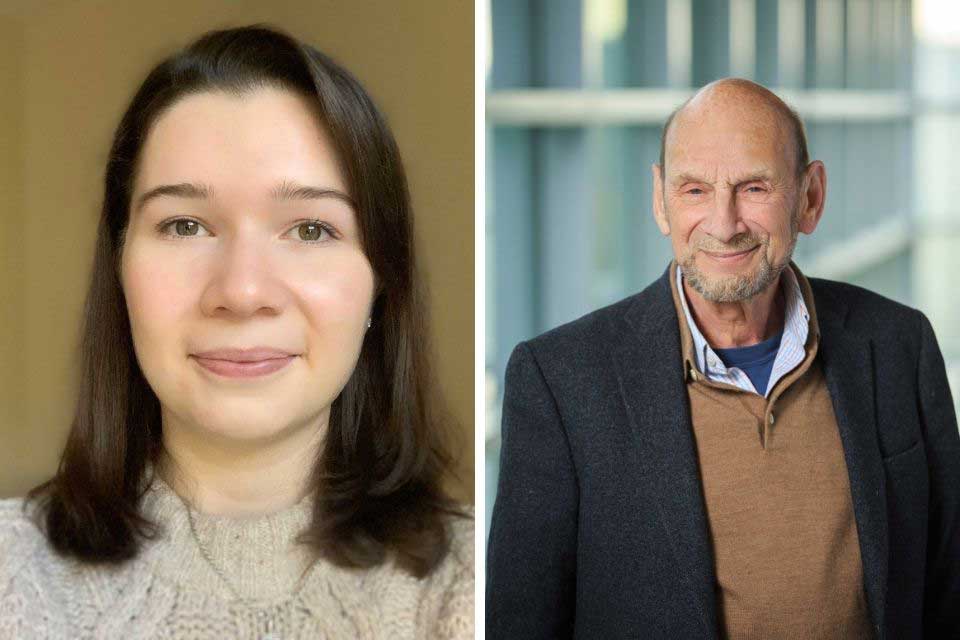 For Alana Hodson ’19, the Calling to a Career in Research Was Personal
More Alumni News