Comedian Josh Gondelman ’07 Is Not Supposed to Be This Nice

Breaking through the stereotype of the brooding comedian, Gondelman is finding success on his own, friendlier terms.

Beyond writing for television and performing stand-up, Gondelman has authored books and started a podcast.

Comedians are supposed to be nasty, brutish and sharp.

They endure miserable childhoods, are plagued by inner demons as adults and act self-destructively.

Their humor, as funny as it is, is an act of revenge, unnerving us with talk about taboo subjects and forcing us to confront our shortcomings and hypocrisies.

And then there's Josh Gondelman ’07. By all accounts, he's the nicest guy in comedy.

He makes jokes about getting haircuts from his wife — "It's just about the most intimate thing you can do with a partner. There's no such thing as a one-night snip." — and being recognized on the street wearing a face mask — "It made me feel like I'm distinctly bald."

He started a podcast during the pandemic, "Make My Day," where comedians compete to put a positive spin on the news and cheer listeners up. His new standup comedy special, out at the end of June, is called "People Pleaser."

Is it all just an act? Does he secretly torture bugs for fun in his basement and poison pigeons in the park? Does he have a spouse and kids in another state? Has he ever snatched candy out of the hands of a baby?

I spoke with Gondelman about his development as a comic, his exploding career on the New York City stand-up scene and his current gig as the head writer and an executive producer on the Showtime TV series "Desus & Mero."

Read on to discover how he's, well, a really nice guy.

How would you describe your style of comedy?

Most of what I do is pretty warm and friendly. And I think that's just because that's the way I know to present things comedically. It's a big part of my comedic voice, like kind of presenting things with a wide-eyed friendliness.

But is that just a stage persona?

No, my voice on stage is a focused version of who I am.

I'm a real people pleaser, and I think comedy is a healthy outlet for that. With comedy, the job is to please. So I'm not subsuming my own interests. I like doing the job.

I had a show recently with a bunch of other comics where it was a very hard crowd. It was very sparse, not a lot of laughter. Some of the comics used a lot of their time to tell the audience that they should have been laughing more.

And when it was my turn, I was like, "Look, they've been beaten up on enough on this show. I'm just going to accept them for who they are." And I think it went very well,  even though overall, of course, it went badly.

Um, let me think of something real. I don't want to do a humble brag ... I was dating someone, and she was having a hard time at work. And I was stressed out about something else, and I remember saying, "Can we have one night where I'm the sad one?"

That doesn't seem so bad.

I'm not effective at being angry, which is embarrassing. I admire someone who can shout, "Hey, what the hell is that?!" and can get results. But when I am angry, I have to process it and deal with it and work through it and then go from there.

Surely, you had an unhappy childhood.

No, it was lovely. I had great parents and a lot of friends. My parents instilled in me the value of being kind and respectful to people.

My dad was a long-time member of his trade union and would go to the meetings and speak up vociferously if he thought that something was not right. So it's not at the expense of being a doormat or letting injustice slide. Treating people with a baseline of kindness and respect is really important.

I was a well-liked nerd and kind of a smartass. I was very deferential towards authority, so that stopped me from being a class clown.

When did you start writing comedy?

I wrote a play in high school — oh, gosh, it's so embarrassing. It was called "Internal Bleating." The fragments of this character's psyche come to life in his apartment and are plaguing him with their opinions. My friend played his id and wore a loincloth and was howling and chewing on things. My sister played “self-esteem.” She was very sweet in the play. It was the first time I was like, okay, I can write things.

At Brandeis, you got more into performing.

We did a sketch comedy show at Chum's in the Castle called Friends Like These. My roommates and I put it on every Saturday at midnight. The sketches would all be like 30- to 50-minute, one-act stories basically that we wrote that week. We would rehearse and then come in knowing we were probably going to forget the lines and have to fake our way through it. It was bonkers.

But we were generating a ton of stuff and getting a lot of experience on stage. And we had kind of a little following on campus, which was fun.

What drew you to stand up?

Stand-up is the most yours, where you can be unique. The things I want to say, I can say, and I like that. And it's very immediate. I like the quick feedback.

I like having this idea and thinking, “Let me try it on stage tonight.” And if it works, amazing, and I can keep tinkering with it, and if it doesn't, then I have to decide how much I believe in it. So I like the immediacy of that feedback and the feeling of "Ah, I got it."

When everything shut down in March [2020], I was a little concerned about what I would do at night, how I would deal with not being out most nights. And I coped with it pretty well, as it turns out. It was nice to hang out at home with my wife, whom I love so much. And we watched a lot of TV, played board games and cooked much more together.

But I thought to myself, if I don't like doing stand-up, it's the perfect time to quit and never look back. But then, as soon as it became possible to perform again safely, I was like, "Oh, I do like it, though. And I think I'm going to do it." I guess I'm in for life now.

Have you ever bombed on stage?

One of the worst was shortly after college when I lived in Boston teaching preschool. An acquaintance of mine from college worked for a talent agency, and he said, "I represent the talent agency that represents Judy Gold. I have a small budget for talent for this show she's doing. Would you come down to Mamaroneck [outside New York] and open for her at this little theater?"

I was so excited. I was getting to open for a big, big headliner. And so I drove down, and I just ate it so hard on stage. It was brutal. And I remember thinking halfway through, "Oh, maybe there's just nobody here. Maybe they're at the bar getting a beer or glass of wine." My brain was protecting me at the moment from the reality that I was just eating it so hard.

But then I introduce Judy, and she comes on and says three words, and there's huge applause. It's like opening chords to Born to Run — that level of enthusiasm.

The audience did not care for me. I wasn't relatable. I wasn't engaging to them.

How do you handle that kind of rejection?

I've gotten a lot better. Now when it goes badly, it's like, "Okay, it wasn't my night. What can I do better? What did I do wrong? Did I make a bad choice with my material? Did I riff too much? Did I go too dirty? Did I not go dirty enough?" Whatever it is, I can think about it intellectually and treat it like a day at the office where it doesn't have to feel enduringly bad if it's not exactly what I want from it. It's not a referendum on me not being good enough or capable.

Has it been hard writing jokes in the middle of a pandemic?

Because it was happening to everyone and because it felt so bad, nothing about COVID was that funny to me, so I was kind of looking elsewhere for the funny stuff. So it was really about examining my own life with a fine-tooth comb and asking what is noticeably different because everything felt so the same.

I did a joke about how my wife cutting my hair was kind of the most intimate thing I've ever done with a partner. I said on stage that you could do anything with a consenting adult that you want, but you can't ask them to help you line up your sideburns afterward. And it just feels like you have to be in a really strong relationship to ask someone to cut your hair.

You've written for “Last Week Tonight with John Oliver” and now for “Desus & Mero.” They're both pretty edgy shows yet never veer into the offensive. How do you maintain that balance?

I don't worry about being offensive as much as how we give the subject matter the respect and gravity it deserves, whether immigration courts or abortion access. How do you treat the people you're talking about with dignity and still make it funny? So it's less about being offensive and more about how you match the tone.

It's the pleasure of goofing around more than anything. I love cracking up with the other panelists, when they make me laugh and I make them laugh. It is such a fun feeling, that kind of synergy. The riffing is delightful, and I've had so much fun doing those shows because it is not my normal hour or 20-minute stand-up set. I prepare a little bit, but everything else is fully improvised, and it's so much fun to get out of my regular performance model for a little and be super present for those recordings.

You're doing stand-up comedy four nights a week. Do you get exhausted from having to be funny all the time?

I'm much more tired because my dog doesn't sleep at night. She's currently on steroids to clear up a little medical thing, so my 14-year-old elderly pug now has the energy level of one normal dog. Every night she wakes up and it's ’roid rage. She's furious. She is normally the laziest dog in the world, but now at like 3 a.m., it's like she's trying to fight someone in traffic — that's the level of anger.

We have two loveseats in the living room, so I put her in one, and I sleep crumpled up on the other one. And for some reason, that relaxes her. The comedy honestly feels like a break from tending to this incredibly cranky senior dog. 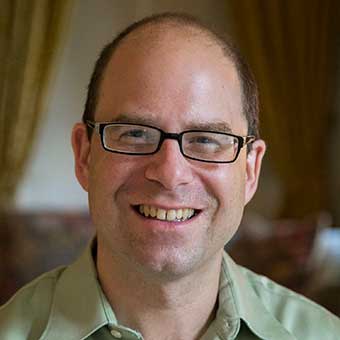 Lawrence Goodman is the editor of research and scholarship in the Office of Communications, Marketing and External Relations and the editor of The Jewish Experience, Brandeis’ website devoted to Jewish issues. 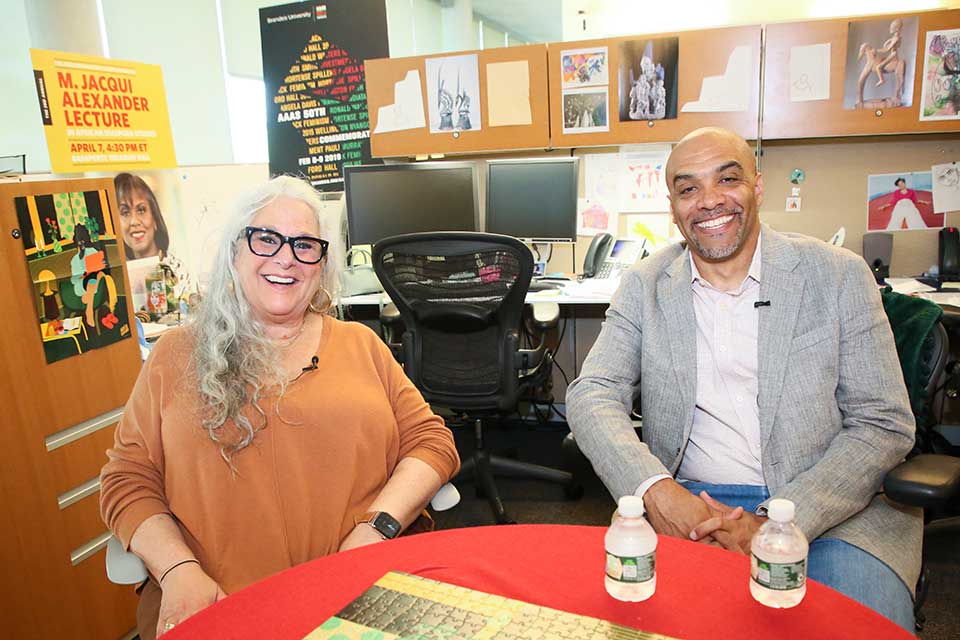